Welcome to the State Regional Archives Litomerice, Czech Republic About the archives

The State Regional Archives (SOA) Litomerice is an administrative body under the Czech Ministry of the Interior. Its jurisdiction covers the geographic area of the Usti and Liberec Regions in northern Bohemia. SOA Litomerice in its current embodiment as a governmental unit of fourteen archives branches was established with the Czech public administration reform passed on August 1, 2002. Since that date, the State Regional Archives Litomerice includes a central office in Litomerice, a branch office in Decin and satellite offices in Zitenice and Most, as well as the State District Archives (SOkA) in Ceska Lipa, Chomutov with offices in Kadan, Decin, Jablonec n. N., Liberec, Litomerice with offices in Lovosice, Louny, Most, Semily, and Teplice.

State legislation governing the operations of the Archives was last updated June 1, 2009.

Great War (period of the WW1 in the Kadan region) 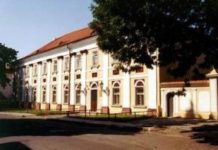